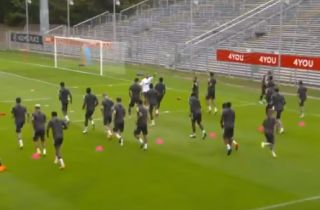 The lads are going through their final preparations in Cologne ahead of Sunday’s Europa League semi-final against Sevilla.

After beating FC Copenhagen in the quarter-finals, we are finally at the business stage of the Europa League where we can expect a challenge in the remaining games.

Sevilla are a good side and the other semi-final will be another tough encounter between Shakhtar Donetsk and Inter Milan.

You can watch highlights of today’s training session below via @ManUtd:

The lads at work in Cologne ahead of Sunday’s #UEL semi-final 🏃‍♂️💨#MUFC pic.twitter.com/I3jqYLLapY

The players will wear their new away strip tomorrow night after announcing its release this  morning.

The Reds wore their new home strip for the first time in the 1-0 win over Copenhagen, so they can be assets of good luck going into next season as long as we win the Europa League outright.