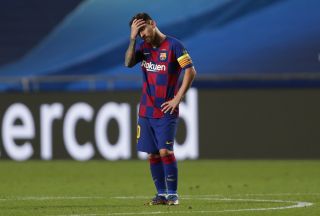 Barcelona were eliminated from the Champions League in disgrace. It’s the worst it has been at FCB for years.

What was supposed to be the biggest match-up of the Champions League quarter-finals only ended up an 8-2 affair in Bayern Munich’s favour. It is likely to have immense consequences.

Bayern Munich will be favourites to win the tournament after last night’s result and are definitely the most feared team in the semi-finals.

This Mullered a side containing Lionel Messi 8-2… and this may well be the last straw for the Argentine, who is surely now considering his future. The team collapsed around him last night — after years of bad buys, Barcelona are 12 months away from another presentimental election and something needs to change.

Being over-reliant on Messi is a stick you can beat Barcelona with but surely that’s unfair. There isn’t a team that wouldn’t take advantage of his brilliance but we are now looking at an end of an era for the club.

Although Manchester United fans were neutrals watching last night’s match they couldn’t pass on the opportunity to reminisce about their 8-2 win over rivals Arsenal.

At the start of the 2011/12 season, Arsene Wenger took his Arsenal side to Old Trafford for a Premier League encounter with the Reds, but the Gunners returned to north London ultimately humiliated by Sir Alex Ferguson’s title winners.

“I’d 8-2 to be an Arsenal fan” is a phrase forever imprinted in our brains.

Anyhow, here’s how a number of United fans reacted on social media after watching Barcelona lose 8-2.

Who remembers the Manchester United, Arsenal game of 8-2? Bayern got lessons.

Same season Van Persie get 8-2 he left his club and joined United, if that is not a sign I don’t know what is pic.twitter.com/c5fLziBiqM

United fans getting happier with 8-2 scoreline ain't new.
What a match! #FCBCFC #UCL