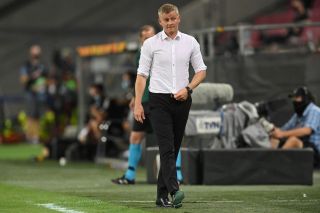 United are two victories away from their first piece of silverware under Solskjaer and a Europa League triumph would come in unprecedented circumstances given the condensed one-leg format in Germany.

The Reds went the full distance in the quarter-final against FC Copenhagen on Monday, with Bruno Fernandes’ extra-time penalty sealing the progression to the last four.

United’s players are showing some signs of fatigue after the protracted season, and the new Premier League season begins in just under a month’s time on September 12.

Solskjaer was asked about his side’s fixture schedule in the pre-match press conference ahead of the semi-final against Sevilla.

“Absolutely no concerns about next season at the moment,” Solskjaer said, as quoted by the Manchester Evening News.

“We have good possibility to finish the season, this is the only way we could have done it.

“We have to use it as preparation for this tournament but also almost a pre-season for next season.

“We can’t complain because this is the world we are in now.”

United will play the Europa League final on Friday if they manage to overcome Sevilla in a challenging semi-final, giving them little time to prepare for the new season.

But Solskjaer trusts the authorities to give the team the players as much as rest as possible, and suggested what the players will do before the start of the new league campaign.

“There is no point about me worrying about it,” Solskjaer added.

“The authorities will give us as much rest as possible. We can give them a two week holiday, and it gives us two weeks to prepare for the first game.

“I can’t see any reason to complain.”

The fixtures for the new Premier League season, which had been due to commence on August 8, are set to be released no later than Friday August 21.