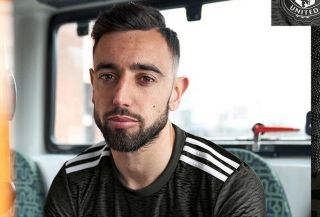 Manchester United have finally revealed pictures of the new 2020/21 season away kit, manufactured by adidas.

The players will wear the new shirt for the first time on Sunday night for Manchester United’s crucial UEFA Europa League semi-final against Sevilla in Cologne.

You will only be able to purchase the new shirt today exclusively from Adidas or official club stores including online via United Direct. A wider release has been scheduled for 15 August 2020.

With the away strip being the second released in two weeks — which is not out of the ordinary — it raises questions about when will clubs lower the cost of replica shirts?

Another question is when will they lower the cost of subscriptions to MUTV and the likes?

I hear the phrase “COVID pricing reality” and feel it doesn’t only appeal to Manchester United when they are trying to sign Jadon Sancho.

When will they realise that these are difficult times for everyone?

Check out the new kit worn by our players below:

Made for the road 🛣 Our new 2020/21 @adidasfootball away shirt, available now — link in bio. #MUFC #ReadyForSport

🧵 New away threads for the Reds. #MUFC #ReadyForSport