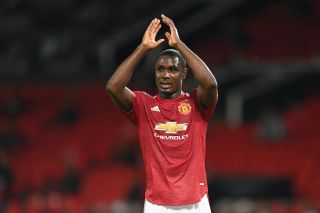 Manchester United forward Odion Ighalo does not intend to leave for Paris Saint-Germain amid reports they are keen to make a move in the transfer window.

United won’t like the idea of having their loan deal with Ighalo cut short, and I don’t think anyone sees that happening this summer anyway, but sources close to the player have told Manchester Evening News there is ‘no truth at all’ behind the rumours.

The source allegedly reiterated that the Nigerian striker is already at the club he always dreamed of playing for.

Ighalo recently extended his loan spell with United until the end of January. That means any summer exit would require mutual termination of his current deal.

Not going to happen.

There will come a time in the near future that United will need to sign a centre-forward, which may not be this summer. That’s why it made sense to get Ighalo in for the first half of next season. What happens then I can only assume has yet to be decided.

Lille’s new striker Jonathan David, formerly of Gent, is a prospect worth keeping an eye on next season and beyond.