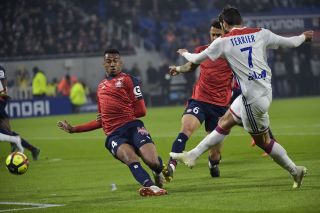 Ligue 1 outfit Lille have rejected a bid from Everton for Gabriel Magalhaes, according to reports.

It is suggested Gabriel is most likely to join Napoli despite reported interest from Manchester United and Arsenal.

James Robson reported on United links to Gabriel three days ago, as per The Standard.

Napoli appear to be counting on Gabriel should Kalidou Koulibaly leave the club this summer, but Gianluca Di Marzio claims Lille rejected a €20m offer from Everton on Wednesday.

It’s obviously very difficult to work on several deals at once — and nobody was prepared for a transfer window during a global pandemic — so it wouldn’t surprise us if United were too occupied with Borussia Dortmund at the moment.

BVB are standing strong on their stance over Jadon Sancho that he will play for them next season. If it proves too difficult to get the England winger in the coming weeks, a time will come for United to try their hand at an alternative target.

It wouldn’t be the worse thing to happen if Ole Gunnar Solskjaer is allowed to sign another mega money defender. I still think someone better than Harry Maguire — but quick enough to partner him — is needed at centre-back.

I don’t think many of us have seen enough of Gabriel to comment on whether he’s that player.