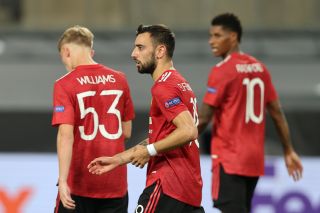 Bruno Fernandes believes he has plenty of work yet to do in order to be compared to Manchester United greats such as Eric Cantona.

Unsurprisingly, Fernandes has been likened to the enigmatic Frenchman for his impact at the club since his arrival from Sporting Lisbon in January.

But Fernandes insists his true motivation is to claim silverware and is focused on Sunday’s semi-final against Sevilla in Cologne.

“For me it is really good to talk about those names,” Fernandes said in the pre-match press conference, as quoted by the Manchester Evening News.

“But for me Cantona was amazing player for the club, but I need to do much, much better to be compared to him. For me coming to Manchester is about winning trophies. I will be happy if we win the Europa League.”

Fernandes has shown his elite mentality on and off the pitch with his leadership skills in his eight months at Old Trafford.

The Portuguese playmaker’s penalty against Leicester City on the final day Premier League showdown secured Champions League qualification for next season and his latest successful spot-kick in extra time against FC Copenhagen set up the challenging semi-final tie against Sevilla.

Fernandes is likely to start against Sevilla as part of the same attacking quartet that has been so destructive since the restart, including Mason Greenwood, Anthony Martial and and Marcus Rashford.