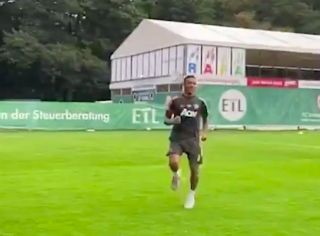 United defeated FC Copenhagen 1-0 to progress through to the semi-final stage, but will need a more convincing display to overturn strong La Liga opposition.

Mason Greenwood was unfortunate to have an inch-perfect opener ruled out on Monday evening due to an offside call, and struck the post with a trademark effort in the second-half.

The 18-year-old is consistently showcasing his almost unrivalled finishing ability and has scored a mightily impressive 17 goals in all competitions during his breakthrough season.

Greenwood has established himself as a first-team regular under Ole Gunnar Solskjaer, who acknowledges that the teenager is the best natural finisher at the club.

And Greenwood has further impressed United fans on social media after the club posted a clip of a remarkable trick shot recorded during training.

He struck nonchalantly from behind a goal, generating remarkable curl to bend the ball inside the post before reeling away in celebration.

See the trick shot below, via United’s official twitter page:

Just look at the curl on that 🤯#MUFC @MasonGreenwood pic.twitter.com/YaMOp6pqJe