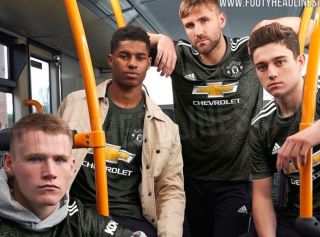 United’s Europa League semi-final opponents Sevilla accidentally posted a picture of the kit design on their website ahead of Sunday’s fixture.

The photo of the strip suggested the Reds will unveil their new strip against the La Liga side for the semi-final clash in Cologne.

FootyHeadlines have gone one step further, releasing early official photos from the kit launch where several United players are modelling the shirt.

The Adidas away shirt is described on the FootyHeadlines website as predominately ‘legacy green’ with off-white logos and a ‘subtle pattern print’.

It is noted that the shirt could officially be released on Friday August 14 after months of leaked images and designs.

See photos of the new shirt United stars are expected to wear for the semi-final below, via FootyHeadlines:

Leaked: The official photos for the launch of the new #mufc away jersey 🌊 [@Footy_Headlines] pic.twitter.com/3SalyBtYQu

What do you think of the new strip? Let us know by tweeting us at Stretty News.