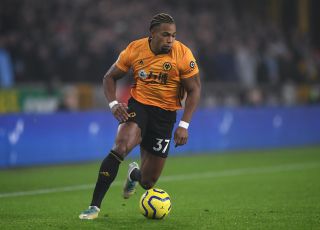 Sky Sports News reporter Rob Dorsett has claimed earlier today that Wolves winger Adama Traore does not want to depart life under manager Nuno Espirito Santo, however, he did hint that Wolves being out of Europe next season could be a problem.

Traore, 24, has risen to the forefront of transfer speculation in recent months after a string of fine performances with his latest coming earlier this week in his side’s Europa League quarter-final tie against Sevilla.

Despite eventually crashing out of the competition after a 1-0 defeat to the resilient Sevilla, Traore was one of few Wolves bright sparks.

The rapid’s winger’s best moment came early in the game’s first-half after an electrifying run at the Sevilla back-line left defender Diego Carlos no choice but to bring him down and concede a penalty.

Traore has been linked with a move away this summer, with Ole Gunnar Solskjaer’s United mentioned most frequently, however, in the latest on the proposed links, sports reporter Dorsett claims the Spanish winger does not want to leave his Midlands side.

🗣”Wolves have had no offers for him and have no need to sell and it is clear he is thriving under Nuno, but they have not got European football”@RobDorsettSky on the future of Adama Traore at Wolves pic.twitter.com/DmhfGW901q