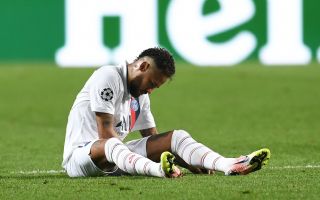 Paris Saint-Germain star Neymar is ‘overrated’ and would not get in Manchester United’s starting XI, according to talkSPORT host Jason Cundy.

The Brazilian poster boy played a big role in PSG’s dramatic comeback win over Atalanta to book their place in the Champions League semi-finals. This season they are aiming to win the competition for the first time, which is what players like Neymar and Angel Di Maria signed to do.

You could say Neymar’s performance against Atalanta had everything apart from a goal. He was the driving force behind PSG yet again, but can he be the star to bring the Champions League to Paris?

“I remember saying after the World Cup that Gareth Southgate would rather have Raheem Sterling in his team than Neymar — I don’t see him as a team player,” said The Sports Bar host.

“Is he a wonderful footballer? Yes. Is he overrated? Without question!

“He’s the worst’s most expensive player, right? He’s not even the best player at PSG! You’re talking about two totally different levels.

“Neymar, I see the flicks, the tricks, the piece of skill, but do I see a player in the same bracket as Messi and Ronaldo, and Mbappe? No I don’t.

“Would he get in the Liverpool team? I don’t know whether Jurgen Klopp would have the way he is as a person. I think Klopp looks deep into a players’ personality.

“Does he improve Liverpool? Mbappe does, but I’m not sure Neymar does. I’d probably have Salah over Neymar. I honestly don’t think he’d get in Manchester United’s front three either.

“I think Neymar is overrated, I don’t see the player a lot of people do. I’d love people to tell me that this player everyone goes on about… I just don’t see it.”

There is a lot of excitement around Neymar because he is one of the best players in the world, but Cundy talks as though he knows him pretty well which I don’t really get. This rant is borderline personal and I do think Neymar would start for most teams in the world.

That’s not to say Manchester United or Liverpool want Neymar, but I do think he’s an amazing player on his day and you want to see players like that in action.

Neymar is not as good as Messi or Ronaldo, but he’s still pretty good!