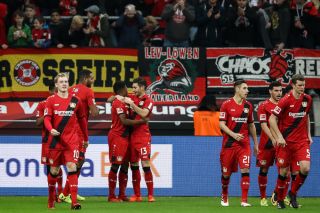 Bayer Leverkusen’s Leon Bailey who has reportedly been a transfer target for Manchester United has landed himself in hot water after being spotted at a party the night before his side’s Europa League quarter-final knockout tie against Inter Milan.

Bailey, 23, has been linked with a Premier League move to Old Trafford for a large part of this summer after the Daily Mail reported back in June that Red’s manager Ole Gunnar Solskjaer was planning a £40m move for the Jamaican winger.

According to German outlet Bild, Bailey has now found himself in hot water after being pictured celebrating his birthday the night before Bayer Leverkusen’s crucial Europa League quarter-final match against Inter Milan.

Interest in the young attacker has cooled somewhat in recent weeks, however, it depends on how Leverkusen reacted now because the 23-year-old could find himself searching for a new club…

It is understood that Bayer Leverkusen chiefs plan on speaking to the player upon his return from his summer holiday.

Chapter 23. This birthday was a very special one. Thank you so much for the birthday wishes ! #jordanyear23🎉 pic.twitter.com/esnNESgI9F

Love to be a fly on the wall during that conversation.