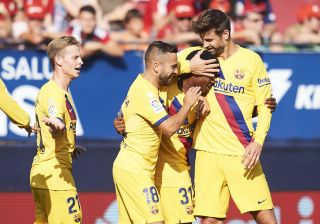 Manchester United have reportedly reignited their interest in Barcelona wonderkid Ansu Fati but have been told the player is not for sale.

Fati, 17, is widely regarded as one of the most exciting young attackers in world football which is perhaps echoed by Barcelona’s insane €170m release clause which would automatically increase to an eye-watering €400m upon becoming a first-team regular.

United are rumoured to be in the market this summer for a wide attacker with a proposed deal for number-one target Jadon Sancho reportedly hitting a stumbling block after Borussia Dortmund sporting director Michael Zorc addressed the press earlier this week and stated that the club’s star-man would not be leaving this summer.

However, if the Reds hierarchy are unwilling to stump up the reported £100m required to lure Sancho to Old Trafford, as per The Times, it does beg the question as to how they plan on snatching Fati from Barcelona.

According to a recent report from Sport, United who have a close relationship with Jorge Mendes asked the super-agent to enquire with regards to Fati’s availability earlier this summer and were advised the price was €100m, however, it is understood that figure is now a lot higher.

The report from the Spanish outlet claims that despite United’s knock back earlier this year, they have reignited their interested and enquired to Barcelona again with a view to negotiate a deal for the 17-year-old attacker.