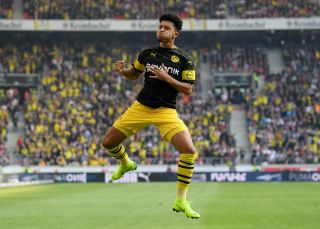 Popular sport radio show host Jamie O’Hara has claimed that he believes it would be ‘wrong’ of Manchester United to complete the big money transfer of Borussia Dortmund’s Jadon Sancho after what has been an unprecedented year for the whole of society.

Sancho, 20, has been the subject of this summer window’s transfer saga as he remains relentlessly linked with a move to United.

The young Englishman is reportedly valued in excessive of £100m by Dortmund, as per The Times and O’Hara claims that valuation set by Dortmund is somewhat ambitious as he feels the attacker’s worth is more like £60m.

Sancho is arguably one of the highest rated youngsters in world football and in addition to what has been one of the most influential seasons ever seen from a young player after being directly involved in 40 goals in 44 appearances, his stock has unsurprisingly risen.

However, despite Sancho’s ridiculous talent in front of goal, O’Hara feels like given the social and economic effects the ongoing COVID-19 pandemic has had on society, United would be wrong to splash the cash this summer.

Speaking on talkSPORT Breakfast earlier today, O’Hara said: “If Manchester United do get Sancho over the line, then they’re going to be a real force.

“They’ve been fantastic since lockdown and I thought they ended the season brilliantly.

“I’d love to see Jadon Sancho in the Premier League… but it’s a lot of money if they’re talking over £100m, especially in the current situation.

“So as much as I’d love him to come, if they have to wait a season, then so be it.

“It would be really stupid while all over the world people are struggling, people are losing their jobs, there are redundancies… and then Man United go and spent £100m on one player – that’s my issue with it.

“If it was a normal market then £100m is worth it for a 20-year-old who is going to be one of your best players.

“But I just think they shouldn’t be held to ransom by Borussia Dortmund, because they know Man United really want him. Be patient.

“We all have to understand that the world’s changed, and those huge transfer fees really and truly shouldn’t be happening right now.”