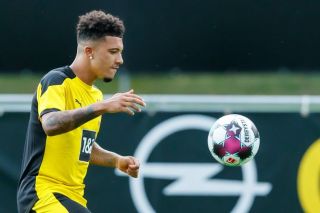 Borussia Dortmund CEO Hans-Joachim Watzke has recently issued a fresh statement amid the speculation that Manchester United will continue in their pursuit for star-man Jadon Sancho.

Sancho, 20, has been a number-one target for United for the best part of 12 months but it is believed that the two clubs remain too far apart in their valuation of the player for a deal to be struck.

Earlier this week Dortmund’s sporting director Michael Zorc addressed the media amid intensifying speculation that United may have been within touching distance of luring Sancho to Old Trafford.

As quoted by the BBC, Zorc told the press: “We plan on having Jadon Sancho in our team this season. The decision is final. I think that answers all our questions.”

However, shortly after Zorc’s statement was made, many fans and pundits alike echoed the belief that Dortmund were playing negotiation tactics with the likes of Owen Hargreaves stating he thinks the German’s are bluffing.

However, the latest development in the relentlessly ongoing Sancho-saga comes from Dortmund CEO Watzke who spoke to RTL: “We are Westphalians [habitants of a region in northwestern Germany].

“We agreed on this rule, which Zorc explained on Monday. For a Westphalian, definite means definite.

“Jadon will play with us for the 2020-21 season. There is no room for interpretation.”