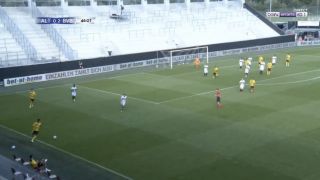 Manchester United number-one target Jadon Sancho has just had a huge say in his side’s third goal in their pre-season friendly against Austrian side Rheindorf Altach.

Sancho, 20, who has been relentlessly linked with a switch to Old Trafford has just reminded the world why he is so badly wanted by the United hierarchy.

During today’s friendly which Dortmund eventually went onto win 6-0, one of the moments of the game came from Sancho in the build-up play for the Black and Yellow’s third.

Sancho picked the ball up from the side-line and although seemingly unable to keep Dortmund’s offensive move going, the young Englishman pulled a stunning pass out the bag which eventually led to team-mate Erling Haaland hitting the back of the net.