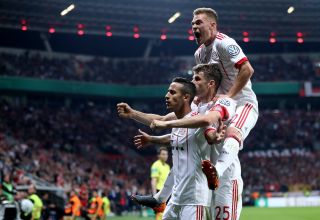 Thiago, 29, is rumoured to be available to move from Bundesliga title winners Bayern Munich for a modest £30m, as per Sky Sports.

The same report also claims that the Spanish midfielder’s preference is to play for Liverpool’s Jurgen Klopp, however, considering the positive effects United boss Ole Gunnar Solskjaer has had on what was once a very fractured United side, surely suggests Thiago could be tempted to a move to Old Trafford.

The 29-year-old’s future is still very much undecided, but with the Reds actively seeking a creative midfielder, Thiago could prove to be not only a financially viable option, but as a genuinely world-class central midfielder, he would also undoubtedly add quality to this United side.

Thiago possesses some incredible technical ability and whilst he isn’t the same kind of creative midfielder that the likes of Jack Grealish is, the Spaniard definitely does some of his best work in the form of carving out chances for his team-mates.

Often operating most effectively slightly ahead of the defensive back-line and with United relatively light in the deep playmaker role, Thiago would unquestionably increase the side’s quality in the centre of the park and provide valuable cover for Frenchman Paul Pogba.

Thiago also has tonnes of winning experience when it comes to winning silverware having won 27 major trophies including 11 league titles and one Champions League trophy.

At 29-years-old Thiago is at the peak of his playing career and when you factor in his technical ability and experience with his price tag, surely the potential rewards outweigh any risks.