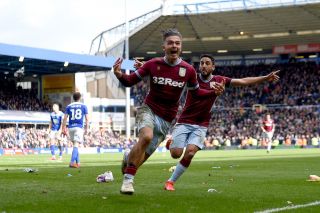 Aston Villa’s Jack Grealish is reportedly set for crunch talks with Aston Villa chiefs upon his return to the club from holiday.

Grealish, 24, has been widely regarded as one of United’s main summer transfer targets this window as the Reds look to add quality in depth to their already lethal front-line.

After helping his boyhood club get back into the Premier League last season, the young Englishman played a pivotal role in their survival which went right down to the to the final-day.

Grealish’s fine domestic form last season has been the catalyst behind much speculation that he could swap his beloved Midlands club in favour of Ole Gunnar’s Solskjaer’s United.

Speculation surrounding the Englishman’s future was intensified earlier this month when his agent Jonathan Barnett claimed in an exclusive interview with Stretty News that playing in the Champions League would help his career.

United have yet to turn their interest in Grealish into an official bid, however, according to a recent report from The Mirror, the attacking midfielder is set for crucial crunch talks with Villa’s chief executive Christian Purslow.

It is understood that Grealish still has three years left on his current deal believed to be worth £65,000-a-week, however, the star would welcome a move to United and is also aware that Manchester City boss Pep Guardiola is also a big admirer.