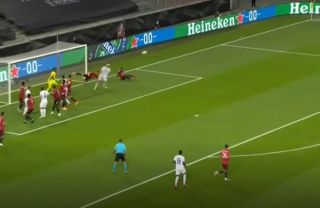 Gary Neville was correct when he said Brandon Williams has that look in his eye of someone that would eat their opponents nose off to win a football match.

The former Manchester United captain did so on Twitter, tweeting: “I like Brandon Williams. What I like about him specifically is he has that look in his eye of someone that would eat his opponents nose to win the match. Keep going kid! Oh he can play football to* [sic] which is always a bonus 👍🏼”

The young left back should real courage in the first-half against FC Copenhagen tonight. The level of courage you’d expect from a Manchester United defender. Gary Neville would be a good example of that.

We’ve certainly got the impression this season that he doesn’t mind taking the honour to wipe out an opponent if given the opportunity.

It was a heroic diving header by Williams to clear a dangerous FC Copenhagen cross that saw Williams put his body on the line.