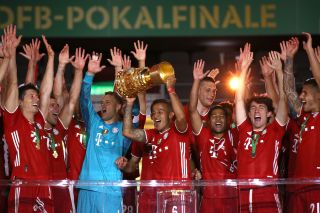 Although Manchester United have improved in midfield following the acquisition of Bruno Fernandes from Sporting Lisbon, it’s an area we need more quality and depth in, especially if the Reds are to challenge for a league title anytime soon.

On top of that, occasionally a world class player will become available and, even if you don’t need them, it’s too good an opportunity to turn down.

Owen Hargreaves is desperate for his former club to make a move for Bayern Munich’s Thiago Alcantara, who was heavily linked to United when David Moyes was briefly in charge back in 2013. A deal would see two of Hargreaves’ former clubs do business together, but hopefully not a repeat of Bastian Schweinsteiger who came to Old Trafford far too late in his career.

The comments were cited by the Manchester Evening News after Hargreaves spoke to BT Sport — with reports that Liverpool had been heavily linked with the former Barcelona midfielder, and a fee of approximately £30m was touted which sounds reasonable for a player of Thiago’s ability.

“They (Liverpool) don’t have him (a player like him),” Hargreaves said. “On his day, he’s one of the top five midfielders in the world.

“At the Bridge, we were blown away by him. As good as Liverpool are, he walks into their starting XI.

“I think everybody needs him. Man United, Arsenal, anybody would take him. He’s one of those players, if you played with him, you’d be blown away by how good he is. The only issue he’s had is injuries. He’s had big injuries at Bayern.”

I’d argue Thiago would fit into every side, though I wouldn’t be surprised if Man City went for him to cushion the blow of losing a technically talented player like David Silva.

But the idea of Paul Pogba, Burno Fernandes and Thiago Alcantara in the same midfield is incredible.