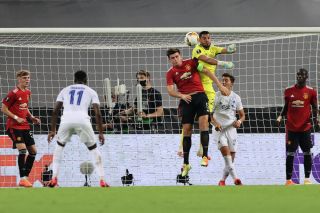 Manchester United and FC Copenhagen are currently battling it out in a single leg tie for a place in the Europa League’s semi-finals. The sides go into the break all square at 0-0 but United will perhaps consider themselves the luckiest of the two to be level after the Danish side started the liveliest.

Despite coming into tonight’s game as the red hot favourites, the Reds didn’t get off to the best start and had to rely on both Brandon Williams and Eric Bailly to save them at the death on two separate occasions.

As the first-half went on, United did grow into the game more and unfortunately had a Mason Greenwood goal ruled out by VAR for a marginal offside.

The decision means that the 18-year-old will have to wait a little longer to be inducted into the United history books for becoming the first teenager in the club’s history to score 18 or more goals in a single campaign in all competition.

In light of the crucial knock-out tie’s first 45 minutes, United fans from all around the world have now taken to their social media to express their discontent after what some describe as a ‘sloppy’ and ‘miserable’ first-half of football.

Been a sloppy first half 😶 #MUFC #UEL

That first half was disgraceful. Rashford again 🤢

Not a good first half at all. Nothing is coming off for any of them 🤦🏻‍♂️

Not good enough from Man United in that first half. Unconvincing at the back and too slow and predictable in possession. They need to move the ball quicker to pull Copenhagen out of their shape more #MUNCOP

First half was trash tho

#mufc have been sloppy, disorganized and shocking at set pieces. Hope they can turn it around in the 2nd half.

Not sure we deserve to be anymore than level going into the break. I don’t think we’ve got going. Hopefully we can up the gears quickly and get that breakthrough goal. #MUFC