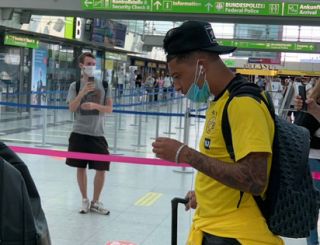 Before anyone suggests that this is a blow in Manchester United’s attempts to sign Jadon Sancho, cast your mind back to last summer and the whole circus that surrounded Romelu Lukaku who eventually signed for Inter Milan.

Sancho has been identified as a prime target for Manchester United this summer, as per Manchester Evening News, with manager Ole Gunnar Solskjaer keen to strengthen the right flank in his team.

Daniel James signed last summer but isn’t at the same level as Sancho. That’s not to say the former Swansea City starlet won’t have a role at Old Trafford; he’ll push for a place next season and likely feature on a rotation basis.

It's a big jump coming from the Championship to Premier League and it happened very quickly for the lad. Get behind him! 🔴 pic.twitter.com/39VML4ih4a

Moreover, if United plan to challenge the likes of Liverpool and Man City they will need better depth to their squad.

Speaking of Borussia Dortmund and squads, see below for their full squad on pre-season:

Stretty News understands talks are still taking place over a deal but the Daily Mail claims August 10 (today) is the deadline for any deal – set by Borussia Dortmund.

Sancho was spotted in the airport prior to the flight (via @MatthiasDersch):

Respected Italian journalist Fabrizio Romano maintains that personal terms are agreed, but the two clubs are yet to come to an agreement which is holding it up.

Jadon Sancho is now with the team – as normal for a Borussia Dortmund player. BVB and Manchester United in talks by two weeks but still no agreement reached. Personal terms have never been a problem. It’s still up to the clubs. 🔴 #BVB #MUFC #transfers https://t.co/0fgYyLWPnS