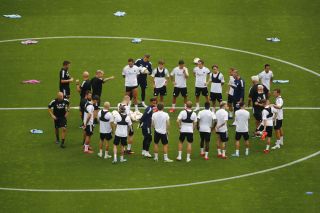 Ahead of tomorrow’s Europa League quarter-final single leg knock-out game, manager Ole Gunnar Solskjaer has sent a warning to his squad that their counter-part’s biggest area of strength is their togetherness.

United have travelled to Cologne for their quarter-final single leg clash against Denmark’s FC Copenhagen, with a place in the competition’s final four up for grabs.

FC Copenhagen came back from a 1-0 first-leg deficit to see of Turkish side Istanbul Basaksehir in the last round to book their place in the competition’s quarters.

Undoubtedly, Solskjaer will be keen to win his first piece of silverware as United boss and in turn see the club lift their second Europa League title in just three years.

However, despite going into tomorrow’s game as the heavy favourites to progress to the semi-finals, Solskjaer has issued his team with a warning to expect FC Copenhagen to be well organised.

FC Copenhagen finished this season’s Danish Superliga in second place behind FC Midtjylland and scored 58 goals on the way.

Speaking ahead of tomorrow’s vital clash Solskjaer has taken the opportunity to remind his players that their counter-parts work very well as a team, as quoted by Manchester Evening News, Solskjaer said: “I’m not surprised. I know how Stale has built the club and what they’re about.

“We played them against Molde and I know Stale such a long time. Copenhagen has a great history in doing well in Europe.

“They have individuals there. The three young forwards are interesting.

“The biggest strength is the teamwork and organisation.”

Read more: Solskjaer claims Martial’s physicality is the best it has ever been