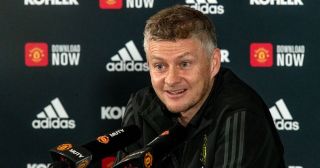 Ahead of Manchester United’s crucial Europa League quarter-final tie against FC Copenhagen tomorrow night, manager Ole Gunnar Solskjaer has sung number-nine Anthony Martial’s praises as he claims the Frenchman is in the best physical condition of his career.

The Frenchman’s domestic form is as equally impressive after enduring his more prolific campaign to date. He boasts a highly impressive 23 direct goal contributions in the Premier League in just 31 starts.

Martial is in prime position to start tomorrow evening in his side’s Europa League quarter-final after scoring just four minutes into his introduction in the 84th minute against LASK on Wednesday.

Speaking ahead of the Red’s crucial knock-out tie tomorrow, as quoted by Manchester Evening News, Solskjaer has claimed that Martial’s physical improvement could be the reason behind his amazing form, he said: “Definitely. Anthony has made huge strides this season in many aspects of his game.

“I like him scoring the simple goals. I know he can do the ‘worldies’.

“He’s in gym and he’s working on his strength. He’s physically at his best level of his career.

“There is more to come definitely.”

United will be keen to take a step closer to lifting the illustrious trophy for the second time in three seasons when they face off against FC Copenhagen at the RheinEnergieStadion in Colonge at 20:00 BST Monday evening.