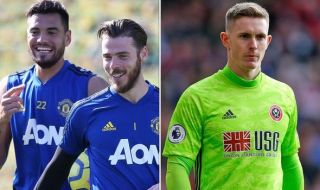 Manchester United are set to take-on Danish side FC Copenhagen in tomorrow night’s Europa League quarter-finals as the Reds hope to replicate their 2017 success when they lifted the trophy for the first time in their history.

United are firm favourites to go on and win the illustrious European trophy having only conceded just the four goals in all of their 10 games so far.

Despite being in such fine defensive form, manager Ole Gunnar Solskjaer has recognised that he may not be able to keep all three of his goalkeepers at the club.

Back-up number two Sergio Romero is United’s preferred choice of goalkeeper in the Europa League and has played a crucial part in his side’s progression to the quarter-final stage.

Elsewhere, youngster Dean Henderson, also on the United books has been plying his trade with Chris Wilder’s Sheffield United for the past two seasons.

Despite the Blades being keen to extend the 23-year-old’s stay for another season, there is believed to be a stand-off in negotiations as United would prefer the temporary club to pay all of Henderson’s wages, believed to soon be £100,000 a week, as per The Sun.

Speaking ahead of tomorrow’s game, as quoted by Manchester Evening News, Solskjaer addressed his goalkeeping choices by saying: “Competition for places is good. We have Sergio, David and Dean there with David backing them up.

“It’ll be difficult to keep three of them at the club. So we’ll see what the decision will be there.”