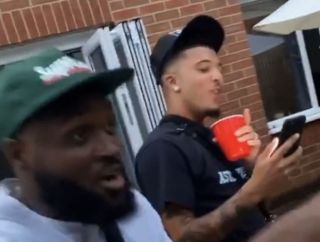 According to the Daily Mail, Manchester United target Jadon Sancho is back on home soil after being spotted on Saturday night at a party hosted with famous rap duo Krept and Konan in the UK.

The Borussia Dortmund winger is reportedly set to complete a mega money move to United this summer, in what would be a record deal for an English player, but it is understood that both clubs are still in talks over a deal.

And United fans on social media got excited overnight at seeing the 20-year-old enjoy a house party in the UK — even though, on a more serious note, Sancho should be keeping his distance rather than socialising if he’s just travelled back from Germany.

It’s also an interesting development given Borussia Dortmund have a series of friendlies to play ahead of the new Bundesliga season.

This years Bundesliga’s runners-up have their first pre-season friendly on Wednesday in Austria against SC Rheindorf Altach, so we await on an explanation as to why Sancho was given time off this weekend to travel home.

However, we’re basing the legitimacy of this story on the Daily Mail report because when we initially saw the video on social media I feared that it could have been old footage.

Jadon Sancho is seemingly back on home soil.pic.twitter.com/wxdXbjKFzW