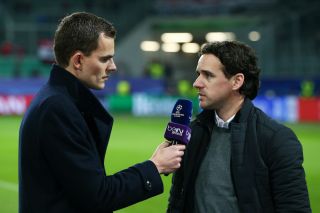 Owen Hargreaves would like to Manchester United bring in a veteran Champions League winning striker this summer.

The former England international has urged his former club to sign Mario Mandzukic on top of other targets.

Big-money signings won’t happen often over this transfer window due to the financial fallout of COVID-19, and that’s part of the reason Hargreaves feels a move for Mandzukic makes perfect sense before he wouldn’t require a transfer fee and United would be acquiring a prolific goalscorer.

Marcus Rashford, Anthony Martial and Mason Greenwood have been scoring for fun since the restart, and the potential addition of Borussia Dortmund’s Jadon Sancho is one that could turn United’a attacking line-up into the best Europe has to offer. Being back in the Champions League next season, United will be able to put that to the test after better teams than what they’d face in the Europa League.

Hargreaves believes a new centre-forward is a must.

“Defensively [Manchester United] were one of the better teams in the league, but in terms of goalscoring they were way behind Liverpool and [Man] City,” Hargreaves said, as quoted by the Metro. “You can do with a 20-goal scorer but I think I’d take Jadon [Sancho] first and then maybe get Mandzukic on a free.”

Of course, this isn’t the first time Mandzukic has been linked with a move to United. The 34-year-old is best known for his spells at Bayern Munich, Atletico Madrid and Juventus. He is now a free agent having left Qatari side Al-Duhail in July — just six months after signing for them.