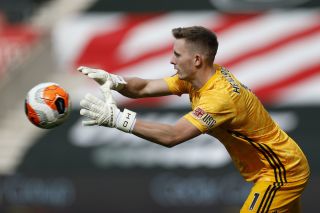 Dean Henderson had an incredible season on loan at Sheffield United — conceding 33 goals in 36 appearances — and earned a nomination for the Premier League Young Player of the Year.

The man he is trying to edge out of the team at Old Trafford, David de Gea, had a shocking campaign by his high standards. He conceded three more goals in two more appearances, but many of his mistakes were howlers…

To make matters more complicated for Solskjaer, the Daily Star claim Henderson is eager to return to his parent club to compete with De Gea for a place in the team.

Henderson has two years left to run on his contract and it is claimed Solskjaer disagrees because the wants the young English keeper to go on loan for at least one more season in order to continue earning regular game time.

There was no surprise on Wednesday night as United took on LASK with Sergio Romero starting between the sticks. The Argentine has been a mainstay when United play in the Europa League.