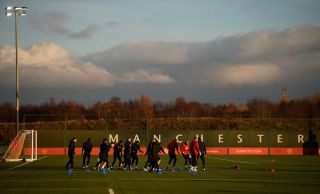 Manchester United have remained committed to their stance on their duty to assist their players and have confirmed that they will not be releasing any player under the age of 19 amid sporting uncertainty at the hands of the ongoing COVID-19 pandemic.

Throughout the unprecedented times the global COVID-19 pandemic has forced the world into, from both a sporting and community aspect, Manchester United Football Club have remained a constant beacon of light.

The likes of star player Marcus Rashford has helped drive a campaign to feed poverty stricken children throughout the country as well as heading a push to ensure the Government make a u-turn on their decision to stop free school meals.

Rashford spoke exclusively to Stretty News earlier this year about his connection to his local community and why he feels so passionately about helping those less fortunate than himself.

The latest gesture of goodwill comes on the pitch after the club’s head of academy Nick Cox confirmed that they will not be releasing any players under the age of 19 as they remain committed in their ‘duty to assist’ their players.

Speaking to the Press Association, as quoted by The Mirror, Cox said: “We took the decision, whilst people were on lockdown, that it just wasn’t right to release kids from the programme – and actually that we’ve got a role to play in the recovery.

“And I don’t say recovery lightly. There’s going to be a recovery process here. People have been through trauma. Different people, different levels of trauma.

“Some people won’t have been affected too much. Some people have had a really difficult period of time.

“The football club has a duty to assist and aid young people’s recovery from what they’ve just been through.

“They have been deprived of social interaction, they haven’t been hanging out with their mates, their routine’s gone, their structure’s gone.

“We’ve got a job to do to say ‘hey, at the end of all this come back with a smile on your face, play football, hang out with your mates’.

“So there was no way we were going to release anyone during that period of time and we managed to be consistent with that message right the way through to our very young professionals, or anyone that hadn’t made a senior appearance.”