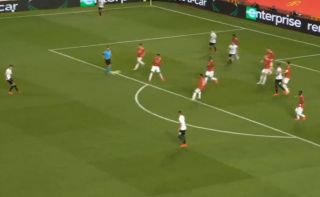 But the LASK goal is definitely one worth looking at again.

Philipp Weisinger scored his first goal in European competition and it was an absolute belter.

The ball was bombling and he still struck it perfectly with the ball beating Sergio Romero on its way into the net.

Although United were quick to respond and it’s 1-1 on the night, we did go into this game with a five goal advantage.

There’s no need for any overreacting about tonight’s display.

A lot of players are trying to perform despite having such few minutes under their belt.

I don’t think Romero could have done anything about this goal either. A worldie strike by Weisinger.

Watch the excellent strike below (footage courtesy on RMC Sport):