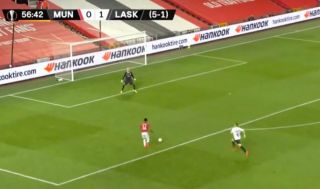 Jessie Lingard has scored an immediate Manchester United equaliser to spare the Reds’ blushes against LASK in the Europa League round of 16.

United have been extremely poor throughout and deserved to go behind early in the second-half when Philipp Wiesinger hit an unbelievable effort past a helpless Sergio Romero into the top corner.

But Solskjaer’s men responded after just 93 seconds, with Lingard netting his second goal in two games.

The 27-year-old midfielder latched onto Juan Mata’s perfectly weighted past to slot home into the bottom corner, with help of a deflection from a LASK defender.

Frustratingly for Lingard, however, he was brought off just moments later with Paul Pogba and Andreas Pereira replacing him and Fred in a double change.