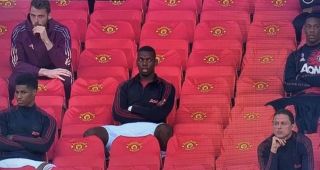 Manchester United and LASK are currently playing in a game which is far from a sporting spectacle after what is clearly being treated as a dead-rubber game by both sides.

Down to a combination of the quality of opposition, the 5-0 aggregate score and an all-changed United line-up, the game is by far the worst since the sport resumed in June. It’s been horrible.

The match, so far, has offered very little excitement with the stand-out moment, if we can call it that, coming when LASK midfielder Peter Michorl headed the ball against Sergio Romero’s cross-bar.

The Reds have probably been slightly the better side in a game which sees manager Ole Gunnar Solskjaer name a much changed line-up, including Timothy Fosu-Mensah at right-back ahead of Diogo Dalot.

Having had their quarter-final opponents confirmed earlier when FC Copenhagen came back from a one goal deficit to beat Turkish side Istanbul, United’s mind is clearly already on Monday’s quarter-final.

Should United go all the way to the final in Cologne on Aug 21, they will have to play FC Copenhagen and one of Olympiacos, Sevilla, Roma or fellow Premier League rivals Wolves in the semi-final.

Back to tonight; the game has reached half-time and United fans have taken to their social media to express their discontent in the Red’s performance in what has been an utterly appalling 45 minutes of football.

That was a HORRIBLE first half #MUFC

Most of these players have barely played for 5 months… But even then, what a poor first half. #MUFC

Might be 0-0 (5-0agg) so this is a good time to bring on the new youths. May be a dull game but most have had little game time. #MUFC #bbcfootball

This B team is awful #MUFC

Can’t believe many of them get paid to play football that bad. #mufc

I support all of these players and wish they’d do well, but let’s be honest, this starting 11 would struggle to win promotion from the championship.
Are you watching this Mr. Woodward? 👀 Need quality depth urgently! 🔴🔴#MUNLASK #mufc #UEL