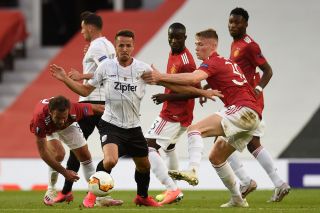 Manchester United completed a 7-1 aggregate victory over Austrian side LASK to progress through to the Europa League quarter-finals.

Ole Gunnar Solskjaer’s rotated side laboured to a 2-1 victory with goals coming through Jessie Lingard and Anthony Martial.

Here’s three things we learned from the poor showing in what was ultimately a procession at Old Trafford.

Dalot on his way

If ever there was an indication that Dalot’s time may be up at Manchester United, tonight would be it.

The Portugal youth international was left out entirely from a rotated squad for a game that was nothing short of a formality.

It’s bewildering that Dalot has almost become the forgotten man at Old Trafford, and he is clearly not in the future plans of Solskjaer.

Timothy Fosu-Mensah, who made his first United start in over three years after the restart, was again selected at right-back ahead of the overlooked 21-year-old.

Fosu-Mensah proved once again that he does not possess the same offensive qualities as Dalot, but Solskjaer looks to have seen enough of the player that arrived at the club just two seasons ago.

Dalot has made just one start after the restart against Norwich in the FA Cup, and it would be surprising to see him included in the remainder of the Europa League campaign.

United’s lack of squad depth was predictably highlighted again against an outfit that should have been brushed aside with ease.

Of course, the result mattered little but no peripheral player staked a claim for a quarter-final spot, perhaps barring the enthusiastic Fred.

It wasn’t until star frontman Anthony Martial entered the scene in the closing stages until the Reds secured victory.

Scott McTominay, Daniel James and Juan Mata were all notably poor, giving United another reminder of the areas they need to add more quality in this summer’s transfer window.

Teden Mengi became the eighth United academy graduate to make his senior debut this season in another show of faith in the youth by Solskjaer.

Unfortunately, the teenager wasn’t handed the start United fans were craving for pre-match as Harry Maguire again skipped the side.

Instead, the Manchester-born centre-back came on in the 84th minute for Fosu-Mensah, and didn’t put a foot wrong without really having the chance to shine.

This is likely to be the only first-team appearance Mengi makes this season with Victor Lindelof to return in Monday’s quarter-final, but his future is definitely bright.

Mengi was fully deserving of his first appearance after shining for the Under 18 and Under 23 sides this season.

We’re excited to see him continue his development and progress into a first-team regular in the coming years.

Solskjaer on Teden Mengi: "He is a leader, a centre-back, someone we believe in, he's strong, quick, good on the ball and I think we've got a decent player there." [bbc]