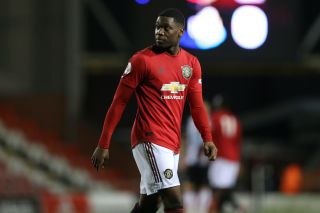 Manchester United played Austrian side LASK this evening in a game which was far from a spectacle but did see Ole Gunnar Solskjaer’s youthful Reds do what was necessary in order to reach the Europa League’s quarter-final stage.

Solskjaer lined a much-changed and youthful side up in a game which always had the potential to be a boring, non-competitive match given the fact United returned to Old Trafford with a 5-0 aggregate lead.

Nevertheless, it was good to see United back in action after a 10 day lay-off, even if the game was set-up to be a bit drab.

Despite eventually winning the game finishing 2-1 after goals from Jesse Lingard and the in-form Anthony Martial sealed United’s destiny in the next round, there was one really amazing stat to come out of tonight’s match.

Youngster Teden Mengi’s second-half showing made him the eighth United academy graduate to make their senior professional debut this season.

The other seven include the likes of Largie Ramazani, D’Mani Mellor, Ethan Laird, Di’Shon Bernard, Ethan Galbraith and Dylan Levitt.

A simply stunning stat from the club who pride themselves on giving youth a chance.

‘The United way’ really is the only way.

Teden Mengi is the 8th #MUFC academy graduate to be given a first team debut this season: