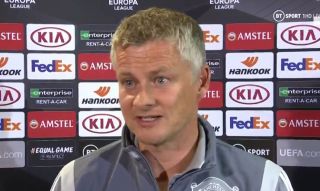 Ole Gunnar Solskjaer gave a post-match interview with BT Sport after tonight’s 2-1 win over LASK in the Europa League.

The Manchester United manager was happy with the result and how Teden Mengi came on from the bench to make his senior debut for the club. The eight academy player to do so this season which is a remarkable stat, really.

“He’s [Mengi] one that we believe in and he’s the same age group as Greenwood,” Solskjaer told BT Sport.

Mengi probably won’t play again next season but you never know as Solskjaer admits he is light on options at centre-back at the moment with injuries.

Moreover, he was asked about Alexis Sanchez after the match and confirmed he has left Manchester United.

“I can confirm that [Sanchez’s departure],” Solskjaer added.

“Alexis has had a good time over there, he’s a good player and we wish him all the best.”

"He's one that we believe in and he's the same age group as Greenwood."

"Alexis has had a good time over there and is a good player, we wish him all the best."

We’d all like to wish Sanchez the best now he’s finally off the wage books. That’s a relief and hopefully we use that money wiser.

It wasn’t the greatest of performances tonight but we knew the job was done before kick-off.

Solskjaer rightly acknowledges that a lot of players were trying to perform without a lot of minutes under their belt. The game time will do them good.