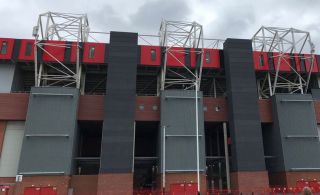 Manchester United are playing right now and yet, here I am choosing to write a piece about some external architectural cladding – that should tell you all you need to know about how United’s second leg Europa League tie against LASK is going.

Anyway, back to the exciting stuff.

Old Trafford has seen it’s Stretford End stand have a slight make-over by way of some flashy new cladding.

I won’t lie – it’s going to be tough to pad this piece out from here on out, so here is a brief break-down on what’s happened in tonight’s game, so far.

The game kicked-off and 23 minutes later we had a drinks break.

As requested by @LiamCorless, an image of the newish Stratford End exterior #mufc pic.twitter.com/JelFkusYcY