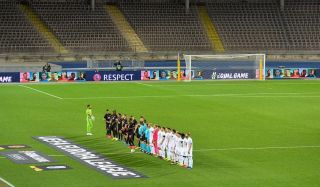 Manchester United will become the first English team to play under football’s new handball laws as they take on LASK tonight in the Europa League.

The Europa League is back and UEFA recently announced that it would implement the 2020-21 Laws of the Game for the resumption of its two European competitions, as per The42.

A key change includes the adoption of the new ’T-shirt’ law for handball offences — this outlines that the shoulder is not part of the arm.

There has been amendments made to a rule change from last summer which meant goals scored or created through an accidental handball have not counted. But tonight United will play under a variation of the rule.

IFAB stated that a handball will be awarded if a player makes his body an ‘unnatural silhouette’, which means to make his body bigger with some help of his arm.

Moreover, it is automatically an offence if the arm is above shoulder height — as seen in the Champions League last season before Marcus Rashford scored against Paris Saint-Germain. A night that will live long in our memories.