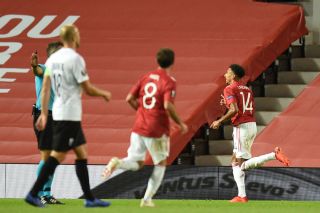 Here are tonight’s Manchester United player ratings as they laboured to a 2-1 victory over LASK to progress through to the Europa League quarter-finals:

Could do nothing to stop Weisinger’s sensational strike. Relatively untroubled apart from LASK’s unlikely wonder goal. 5

Showed good ambition going forward but let down by poor crossing. Defended astutely and given an early rest ahead of the quarter-final. 5

Has a tally of three goals for United and should have plenty more as he missed two more good opportunities from corners. Should have been rested. 5

In the wars as always and was fully committed to the cause. Didn’t look quite as solid as Victor Lindelof against weak opposition. 5

Found himself in promising positions going forward but his final delivery left a lot to be desired again. The Dutchman did little wrong defensively but his selection highlights the growing uncertainty of Diogo Dalot’s future. 4

Struggled to assert any dominance in midfield and looked out of sorts. Did little to stake a claim for a starting spot in the quarter-final and was lucky to stay on the pitch ahead of Fred. 4

The Brazilian looked lively and was arguably United’s best player in the first-half. Passed prudently and did enough to be considered for the latter stages of the competition. 6

Wasted on right in the opening stages and off the pace on an evening where he could have shown Solskjaer his credentials for further involvement in the competition. Nice assist for Martial. 4

Frustrated to be hauled off moments after scoring his second goal in consecutive outings. United’s brightest attacker in the first-half with some tidy touches. 6

Kept LASK alert with his electric pace as the opposition tired but showed little invention in the final third and his deliveries were woeful at times. 3

Starved of service throughout but missed a great chance after some tidy play early in the second. Frustrating evening. 4

Brought a much-needed level of class to proceedings but didn’t have a decisive moment. 5

Should be his final United appearance. No cutting edge in the final third after his arrival from the bench. 4

Promising showing on the left flank when brought on for Williams. Unlucky not to start. 6

A proud moment to make his first United appearance from the bench but should have started instead of Maguire. 5