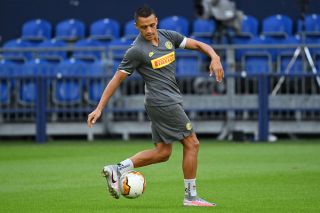 Inter Milan have completed the permanent signing of Alexis Sanchez, with the Chilean forward’s Manchester United nightmare finally coming to an end.

The Serie A giants have completed their third signing of a surplus United player in a single year, following the recent arrivals of Romelu Lukaku and Ashley Young.

Sanchez, 31, had a disastrous 18 months at Old Trafford before his season-long loan switch to the San Siro, which has largely been disrupted by injury.

But he has finally discovered some form since the restart, scoring three goals and registering seven assists.

The impressive run of goal contributions has convinced Inter to sign Sanchez on a permanent deal, and the Italian club’s chief executive Beppe Marotta confirmed that the transfer will be made official on Thursday morning.

“The player is entirely owned by Inter. We have a contract with him for three seasons. We believe in him, that he can be a strong part of this squad and are happy to have concluded this deal.”

The permanent exit of Sanchez will be a relief to United and their supporters; the forward will undoubtedly go down as one of the biggest flops in the club’s history.

Sanchez’s departure makes the famous number seven shirt vacant again at Old Trafford. The jersey’s reputation has been tainted by recent occupants but it could be given to a new player this summer.

BBC Sport report that Jadon Sancho is United’s top transfer target this summer and surely he will be given the number seven shirt if a deal is completed for the Borussia Dortmund starlet.