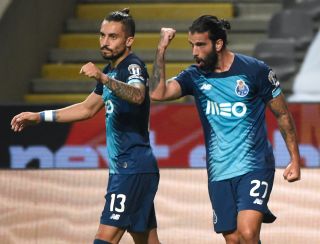 Alex Telles has just won his second Primeira Liga title with FC Porto, so he might now feel this is the time to make a move to one of the bigger leagues and challenge himself that extra bit more.

He’s spent a number of years developing his game in Portugal but these links are new. Forgive us for not knowing a great deal about the Brazilian, but at least he’s previously played for Galatasaray and Inter Milan.

Portuguese publication A Bola remarkably claim Manchester United are interested in bringing Telles to Old Trafford — crediting ‘the English press’ for the links, however, we’ve discovered it’s a non-runner because there’s nothing in the English press to suggest United are targeting Telles…

I’ve done a bit of digging and found an opinion piece published by the Manchester Evening News which argues Telles would be a good option for the Reds this summer, with Ole Gunnar Solskjaer looking for defensive reinforcements.

That’s where all of this stems from… Does that qualify for a headline that translates ‘Alex Telles targeted by Manchester United’? *Face palm*

A Bola ignore the common practice of sourcing the outlet they are financially benefiting from with this story. It’s hard enough to filter out the crap on social media but reputable publications have a responsibility rather than fill our brains with more rubbish.

I’m hesitant to believe anything that comes from Portuguese media after all the speculation that came prior to Bruno Fernandes’ transfer from Sporting Lisbon to United. It was tiresome and non-stop and one hundred times worse last summer when he didn’t join as opposed to January!