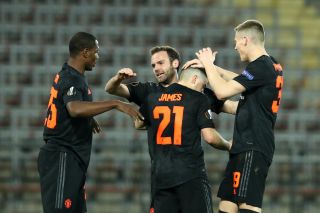 The Reds take five away goals into their second leg clash at Old Trafford so it would be fair to say Ole Gunnar Solskjaer has rested some of his best players, with the tie being dead and buried.

Although some may have expected Solskjaer to field a team of youngsters, the Norwegian has not done that and is allowing fringe members of the squad to prove themselves.

Sergio Romero is in goal with an intriguing back four of Timothy Fosu-Mensah, Eric Bailly, Harry Maguire, and Brandon Williams who signed a new long-term contract with the club yesterday.

Scott McTominay and Fred will be asked to add some steel to our midfield. Then it will be up to Juan Mata and Jesse Lingard to find gaps in LASK’s defence for Daniel James and Odion Ighalo to exploit.

See the team below, as tweeted by @ManUtd: