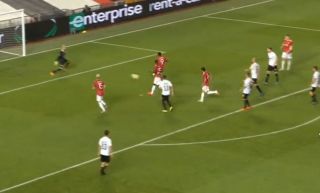 Shortly after coming on as a substitute Anthony Martial put Manchester United into the lead against LASK as the Reds won 2-1.

Our Austrian opponents opened the scoring with a stunning strike from distance stunning Sergio Romero.

Thankfully United didn’t take long to equalise as Jesse Lingard scored his second goal in as many games.

There hasn’t been much life in the game tonight with United sure of their place in the next round after beating LASK 5-0 away from home.

But Martial wasn’t long on the pitch before a nutmeg on LASK’s goalkeeper saw the Reds go ahead.

United can safely look forward to the Champions League next season after finishing third in the Premier League, but Solskjaer will want to finish his first full season in charge with a trophy. The Europa League presents a very good opportunity to do that.