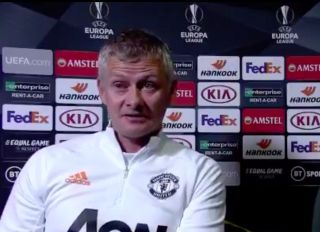 Ole Gunnar Solskjaer appears open to the idea of Manchester United signing a central defender in the summer transfer window.

United must improve in several areas this summer to accelerate their rebuild and close the gap on rivals Manchester City and Liverpool.

And many supporters have suggested that the addition of centre-back to provide competition for Victor Lindelof and Harry Maguire is imperative, despite United’s impressive defensive record in the second half of the season.

According to Sky Sports, Lille centre-back Gabriel Magalhaes has emerged a target this summer, and fits the profile for being young, affordable and having plenty of potential.

Solskjaer was asked about the centre-back issue in Tuesday afternoon’s press conference before the Europa League second leg against LASK at Old Trafford.

The Norwegian boss reiterated that the club are ‘always looking to improve the team and squad’, but believes his side have been ‘very solid’ at the back.

Anyhow, if United are to bring in a new central defender this summer, they would surely have to jettison some squad players that are surplus to requirements.

The belated sales of forlorn defenders Phil Jones and Marcos Rojo would leave space in the squad for a new arrival.

Listen to Solskjaer’s thoughts below, courtesy of Sky Sports:

🗣"I think we have been very good at the back"

Ole Gunnar Solskjæ on if he will improve his defence in the transfer window pic.twitter.com/gsrzJC2N67

READ MORE: Report: Man Utd set £20m price tag for defender who has fallen out of favour with Solskjaer