Manchester United’s starting XI in the Europa League last 16 second leg against LASK could be dominated by academy graduates.

Ole Gunnar Solskjaer’s men thrashed the Austrian outfit 5-0 in the away leg played behind closed doors just before lockdown, making Wednesday evening’s meeting at Old Trafford all but a formality.

Solskjaer is expected to make a host of changes for the fixture, and has already confirmed that peripheral midfielder Jessie Lingard will start.

Jesse will be starting tomorrow, but the team won’t be too different from LASK in March,” he said, as quoted by the Manchester Evening News.

There could also be an opportunity to start for at least six more players that have progressed through the club’s academy ranks.

As reported by the Metro, teenager defender Teden Mengi is in line to make his first-team debut with one of Harry Maguire or Victor Lindelof likely to be rested.

Ethan Laird could also be given his third Europa League appearance of the season at right-back after training with the first-team after lockdown.

Solskjaer may opt to select Scott McTominay as the experienced figure in a double midfield pivot with James Garner.

Garner is expected to go out on loan next season with his path to the first-team currently blocked, but he should be given a chance to impress at Old Trafford.

Alternatively, young Welshman Dylan Levitt, who made his solitary first-team appearance for the Reds alongside Garner in midfield against Astana in November, could get the nod.

Tahith Chong has been starved of first-team opportunities this season and is another player who could go out on loan after signing a new two-year deal.

The Dutch winger has made four starts in all competitions this term, but may be granted an opportunity in this game that is ultimately a precession before United’s quarter-final against FC Copenhagen or Istanbul Basaksehir. 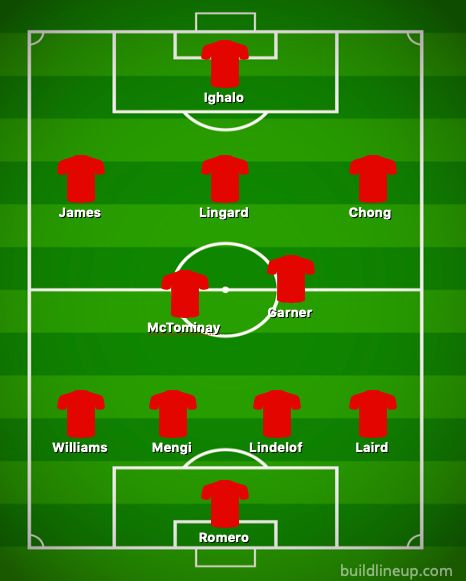