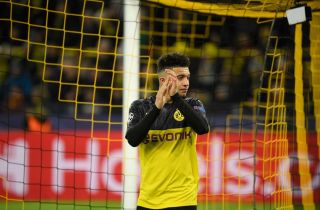 It now seems a matter of when, rather than if Jadon Sancho will become a Manchester United player in this summer’s transfer window.

Of course, the deal to sign Sancho is a complicated one with United needing to be creative with their resources during this unprecedented period.

But the Guardian report that United are close to agreeing a fee with Dortmund that will make Sancho the most expensive English player in history.

It is believed United will pay an initial £90m in three annual instalments for Sancho’s services, plus an extra €20m in performance-related add-ons.

The Guardian’s report adds that Sancho will earn a significant pay rise of up to £250,000 per-week in a highly lucrative five-year-contract.

Sancho is one of the most exciting prospects in world football after totalling 33 goal contributions in the Bundesliga this season.

His addition would complete one of the most dangerous attacking quartets across Europe and help accelerate Solskjaer’s rebuild as the Reds look to challenge Liverpool and Manchester City for the Premier League title.