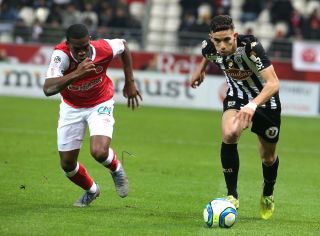 The first time we heard about Rayan Ari Nouri was last week when he emerged as a potential Manchester United target.

French publication Foot Mercato ran a story claiming United have made an offer for the left-back, also alleging that the p[ayer was in Manchester last week to visit training ground facilities. The twist here is that Manchester City are reported interested too.

Whoever signs him will need to deal with Ligue 1 side Angers first. This season they finished 11th in the table, and his manager Stephane Moulin spoke highly of his ability in a recent interview with GGN: “It is not certain but there are chances that he will leave so we sought to get ahead of it. We have decided that if Rayan leaves, we have his successor in Souleyman Doumbia.

“For Rayan, I have rarely seen a boy with this talent, he is very ahead of the game. He was very well balanced and I think that he will find himself in a big club.”

Ait Nouri made 17 appearances in Ligue 1 for Angers this past season, providing two assists, before the campaign was brought to a premature finish over the global coronavirus pandemic.

However, earlier in July, Moulin expanded more on the 19-year-old’s game.

“I just love his sense of the game,” Moulin told Eurosport. “He has made a lot of progress on the defensive side. At first he was a defender who didn’t like to defend too much.

“He also made a lot of progress athletically. I also like his way of evolving, he is a modern player, able to eliminate his opponent and make assists.

“He creates play and dangers. Now, he takes on another dimension because he begins to defend well collectively, while being interesting individually.”

Ari Nouri could provide even more competition at left-back in Ole Gunnar Solskjaer’s side.

While Luke Shaw is the starter and Brandon Williams continues to push him, Ari Nouri could come in and prompt another positive boost for the position in the team.

It’s been a while since we had a top class Frenchman at left back!