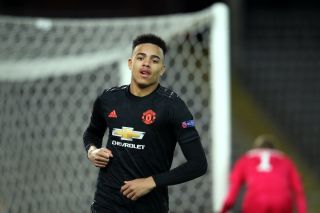 Manchester United hot prospect Mason Greenwood will have up to four more games to get himself into yet more record books as the Europa League prepares for itself long-awaited restart.

Greenwood, 18, has been one of European football’s best break-through prospects this campaign after making the sporting world sit up and take notice.

The youngster has enjoyed a highly impressive campaign having hit the back of the net 17 times in all competitions.

Despite the domestic season coming to an end in a conclusion which saw the Reds secure Champions League football next season, United still have a possible four games to go in this season’s Europa League.

With a handful of games still to go, Greenwood still has chance to write his name in the history books, as per United’s official website.

Most prolific teenager since Wayne Rooney

At just 18 years of age, Greenwood’s 17 goals this campaign have equalled the record set by Wayne Rooney in the 2004-05 season which saw him become the highest scoring United teenager.

Should Greenwood bag himself at least one more goal in this season’s remaining games, the 18-year-old will re-write the United history books.

It is also worth noting, should Greenwood fail to better Rooney’s record this season, he will get another chance to next season as he won’t turn 20 years old until Oct 1, 2021.

With a possible four games to go this season, United’s attacking trio of Greenwood, Anthony Martial and Marcus Rashford will still have chance to beat a 55 year record.

Rashford and Martial both have 22 goals to their names as Greenwood sits on 17, however, should Greenwood net another three times, the United trio will become the first United strike force to bag at least 20 goals each in a single campaign.

United’s proudest tradition is arguably their ability to produce youth players and turn them into world beaters.

Undeniably, the pick of the bunch was legendary midfielder Paul Scholes, especially during the 2002-03 campaign when he scored 20 goals in all competitions.

With the exception of Marcus Rashford this campaign, no other United academy graduate has managed to net 20 or more goals in a single campaign.

Should Greenwood extend his tally by at least another three, his name will be entered alongside some very fine talent indeed.