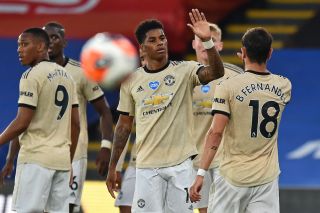 Marcus Rashford pulled off more nutmegs than any other player in the 2019-20 Premier League season.

A remarkable stat given he missed a lot of football prior to the global coronavirus pandemic, which saw the Premier League league suspended and allowed Rashford time to recover so he could play a part in United’s final games of the domestic season.

It ended up a high note as United finished third and got back into the Champions League. Moreover, we still have a chance to win a trophy with the Europa League latter stages left to play.

But Rashford can now be considered one of the best tricksters in the top flight, if he wasn’t already…

According to ManUtd.com, Rashford topped the table when he slipped the ball through Mark Noble’s legs in the 1-1 draw with West Ham at Old Trafford.

Rashford finished the Premier League season with 13 nutmegs, one more than second place Diogo Jota who plays for Wolves.

In what has been a remarkable season for the England international, it’s only now he’s getting the praise he deserves.

Keep up the good work, Rashy!