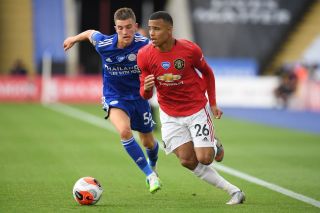 Mason Greenwood transition from youth team football to first team at Manchester United has been incredible to watch.

From being used sparingly for England’s youth teams, there he was, suddenly destroying defenders in the Premier League and putting balls past goalkeepers for fun.

He is only 18 and he’s winning player of the month awards for Manchester United.

For July, he has been voted as United’s best performance and we’re not going to disagree with that. We had been overly reliant on new signing Bruno Fernandes but when he started to look tired, Greenwood jumped suddenly to United’s call.

🥁 Presenting our Player of the Month for July: #MasonGreenwood 🌟 #MUFC

In the Premier League this season Greenwood has managed 10 goals in 31 appearances – four of those coming in July.

Next season he will be looking to build on that with more goals and hopefully a title challenge.