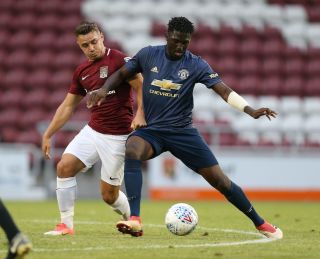 Manchester United Under 23 hot prospect Aliou Traore is reportedly a target for French side Caen amid suggestions the youngster is open to a move back to his home country.

Traore, 19, made his United youth debut against Wolves in the Premier League Cup and two years later went on to contribute to his side winning the UEFA Youth League.

The young, powerful midfielder joined the United youth set-up in 2017 from Paris Saint Germain’s academy and has enjoyed a fairly decent campaign for the Reds this season, scoring four goals in 14 Premier League 2 appearances.

However, despite Traore’s impressive campaign and being introduced to Neil Wood’s U23 squad, reports in France suggest that the youngster could be on his way back to his homeland amid speculation that Ligue 2 side Caen are interested in the midfielder.

According to French outlet Foot Mercato, Caen have already met with Traore’s representatives at leading agency Stellar Group to discuss a possible move for the highly rated teenager.

It is unclear in the report whether Traore’s move would be temporary or permanent, but it seems he could be on his way out of Old Trafford this summer.